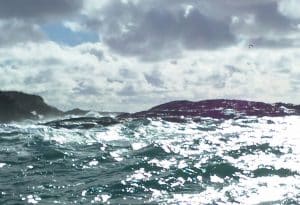 We made it to France :-). Husband is feeling and looking good, enjoying swimming and sunbathing and clearly benefiting from being out here. We haven’t had any long (or medium!) hikes and he’s pacing himself while swimming but he hasn’t been feeling breathless and is hopeful his red cell count may be up a bit next time or at least stable. I think he feels better now than he did over the last few months. He seems to have some really good days and a few ‘non’ days when he’s lacking in energy, often apparently linked to the odd night of poor sleep.

We took a boat to visit a little island Husband had gone to last year. He so much wanted us to get here together. Here we are, enthusiastic dog to boot. Sadly the lymphoma is also here but for now at least it’s allowing us to have a holiday. It’s so beautiful here.

When I thought I had bowel cancer it felt like my body was betraying me by looking normal and harbouring something that could kill me. It’s much worse for Husband because he looks (and generally feels) pretty well.

For now we’re both breathing more easily – literally and figuratively – and sleeping better.